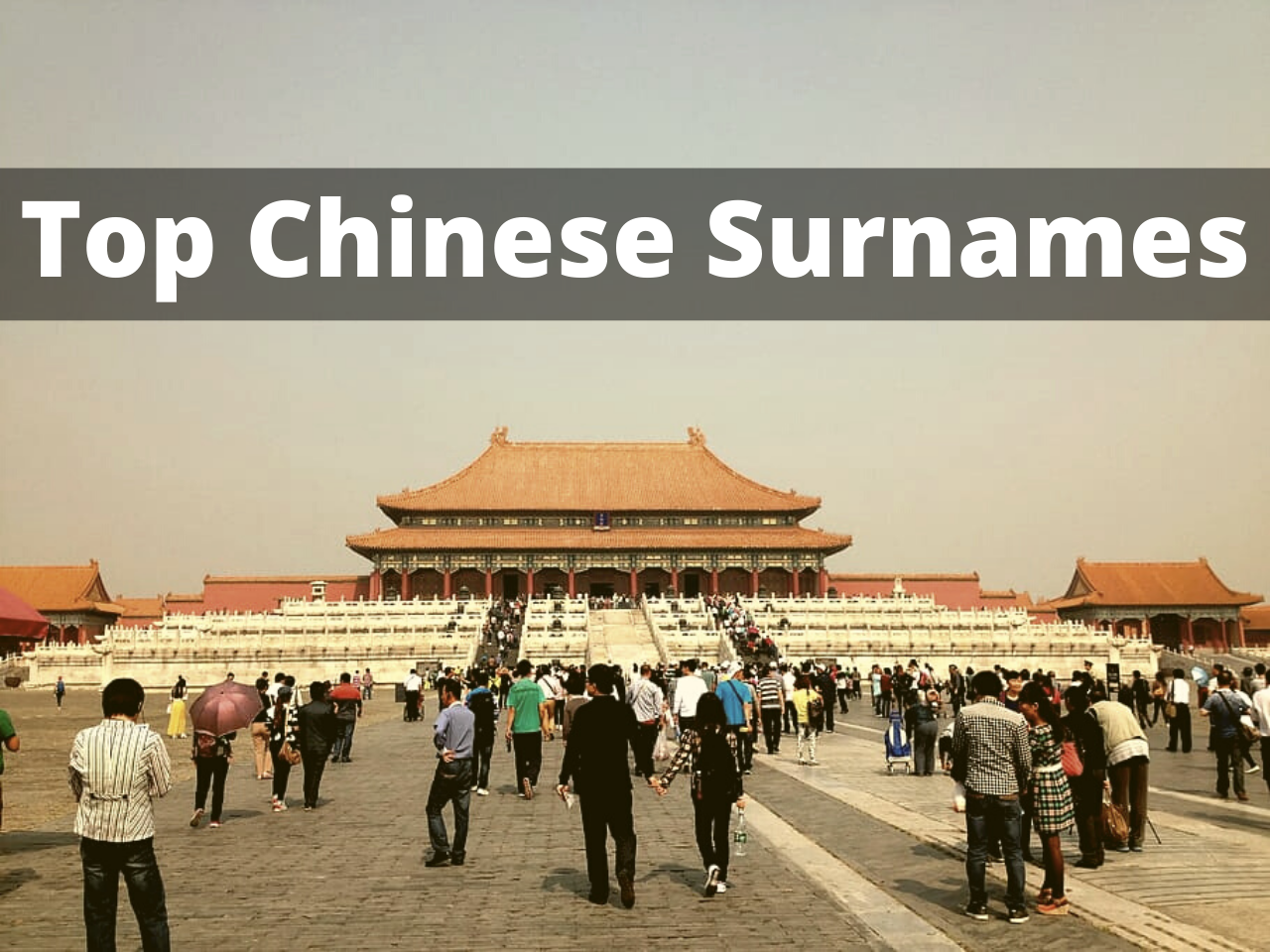 Although there are currently around 2,000 Chinese surnames in use, the top 100 surnames are used by 87% of the population. In fact, the top three Chinese surnames, Li, Wang and Zhang, are also the most common surnames of any in the world. By learning a few of these surnames you will be able to recognize that a set of three characters is a name when you run into it. You can also use one of these to create your own Chinese name.

In Chinese, the surname comes before the first name or given name. In English we often call a surname a last name, but in Chinese it always comes first! The exception is when names are translated into English, in which case the surname is commonly placed after the name. An example would be Jackie Chan, whose Chinese name is Chan Kong-sang.

Wáng is the most common surname in mainland China and is a royal surname meaning “King.” This surname has origins from multiple royal families from the Qin dynasty to the Tang dynasty. Those with the surname Wang are likely descendants of royalty.

This surname means “plum” or “plum tree” and has a legendary beginning. In prehistoric China there was a Minister of Law named GaoYao. His title was Da li (大理) or great judge and his descendants adopted Li as their surname. It is uncertain how the name was later changed to 李, however according to popular folklore it was from Li Lizhen (理利贞) whose father was executed by the King. He ran away with his mother and survived by eating plums. To show his gratitude, Li Lizhen changed his name from 李, a homophone of 理.

Zhāng means widening bow, or archer. The traditional origin of the surname comes from a son of the Yellow Emperor who was inspired to invent the bow and arrow.

This surname means to kill or destroy and was used by Chinese emperors during the Han Dynasty.

This is the most common surname in Taiwan and Singapore. The name originated from the former Chen State in Southern China and is a very common name there.

Yáng is another surname that can be traced back to royalty. There are a few origins of the name including from the Sui Dynasty and Zhou Dynasty.

This surname means yellow. There were at least three Huang kingdoms and most with the surname Huang can trace their lineage to one of these kingdoms.

Zhao is one of the most ancient Chinese surnames and like many of these surnames, its origins come from legend. There was an officer during the reign of King Mu who was very skilled at training horses and riding chariots. He was so helpful to the King and well-respected that he was made Lord of the town of Zhao and he and his descendants took on the name.

This name originated from the ancient state of Wu and means gateway to heaven. The state of Wu was established by the two elder sons of Tai Wang, the King of Zhou, in the 13th century BC. Their descendants eventually adopted the surname Wu. In time, the state of Wu became a powerful kingdom with the help of Generals Sun Tzu and Wu Zixu. Sun Tzu is best known as author of The Art of War.
Therefore, the surnames Wu (吳), Zhou (周), and Ji (姬) are historically related.

The surname Zhōu is related to the previous surname, Wú. Wu Wang, the youngest son of Tai Wang, became the king of Zhou and established the Zhou dynasty. To honor him, his descendants took on the surname Zhou.

The surname Xú came from the land of Xú, an ancient state that was reigned over by the royal family for over 1,000 years. After the state of Xú was eliminated, the descendants of the King adopted their country’s name as their surname.

The ruling family and descendants of the state of Zhu adopted this surname after their state was conquered and annexed by the state of Chu.

The surname Hu has several historical origins. It could derive from the son-in-law of King Wu of Zhou. His son-in-law was known posthumously as Duke Hu and many of his descendants adopted Hu as their surname.

There you have it, the most common Chinese surnames. Do you know anyone with one of these surnames? Next time you can share with them some fun facts about the origin or meanings of their name. This list of names is according to a report on Chinese names from the Ministry of Public Security.

If you want to practice some more names or just practice reading Chinese you can try out the Du Chinese app.

The Duanwu Festival Aka The Dragon Boat Festival