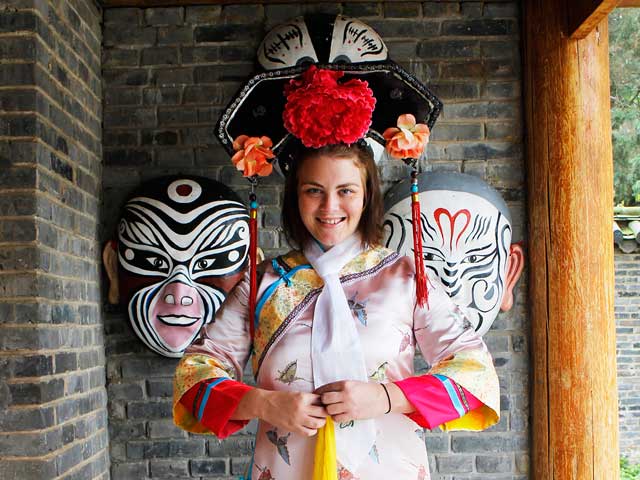 Lena is from Denmark and has been in China for three years. She is working fulltime at LTL Mandarin School while she is filming videos for her YouTube channel Lenaaround.

‘Ni hao ma?’ is a phrase I hear often. It isn’t coming from the Chinese friends I bump into on my way around Beijing, but rather from the expats who learned Chinese abroad. It’s come about as a direct translation of the common English greeting ‘How are you?’. I’ve been in China for three years now, and I’ve only ever heard a Chinese person use this phrase if somebody looks like they are sick or hurt in some way. Only in this context would a Chinese person ask ‘Ni hao ma?’, meaning literally ‘Are you okay?’. This is just one example of how a student who studied Chinese outside of China uses the language differently. Students of Chinese abroad learn to translate the words directly – nothing is wrong with the sentence in itself, but the Chinese just don’t use the phrase like Americans and British people do. This is why if you really want to learning to speak like the locals, it’s important that you study the language in China.

So you might have decided to go to Beijing, you’ve bought your ticket and is ready to cross the globe and immerse yourself into the Chinese society and language learning. That’s great! But when you arrive, you need to pay attention to a few things which can make it difficult for you to fully immerse. Now, don’t think it’s something dangerous or anything but there are a few things which can make it difficult to learn Chinese. Let me tell you this, Beijing is a very international city and there are many foreigners around. You might go to Chinese class a few hours a day but after school you’ll go out with your foreign friends for beer and baijiu (Rice wine). This is probably the first and greatest trap you’ll encounter when it comes to learning Chinese in China and it is perfectly normal. Don’t worry! When arriving in a new country with a different culture and language, most people automatically seek to find other people similar to themselves. It is easy with these foreign friends. You can talk to them without any language barrier, they understand what you mean and they laugh at your jokes. That’s great but it also means that you don’t learn or practice any Chinese.

So what can you do to prevent your two weeks, six months or one year stay in China to becoming one great party with international friends?

If you are ready to really immerse and spend your time learning the Chinese language, one of the best things to do is to choose another and less international Chinese city. Spending all of your time in the center of international cities such as Beijing and Shanghai, you’ll bump into a larger number of foreigners and Chinese people who’ve been abroad and speak English as well which isn’t doing any good for your Chinese language learning.
If you really want to see some fast results, going to a smaller town such as Chengde, a local Chinese town only two hours from Beijing, is a great choice. Chinese people in Chengde speak with a clear Mandarin tone which is what you want to learn. Going to many other places in China, the locals will speak different other dialects which are only understood in their area.

What about some Chinese housemates?

Another good advice for learning Chinese faster is to find some housemates who speak clear Mandarin Chinese. This can be a bit tricky because many young Chinese in the bigger cities are eager to learn English and you will be their best option for this but it is possible to make it work. I once lived with my Chinese friend’s parents (Don’t ask me how that happened) who spoke clear Mandarin and had no intensions of learning English. I was ‘forced’ to speak Chinese all the time for a month and it was hard in the beginning but I gained so much from it and my Chinese language level increased fast because of this one-month stay.

Many Chinese people are shy and usually also afraid that their English language level is not good enough to have a conversation with you so don’t be afraid of making the first move. When they hear that you actually do speak Chinese, they will instantly start chatting with you and before you know it, you have ten new Wechat (Chinese chatting app) contacts which can be very useful because you can chat with them online and thereby also practice your reading and writing. If you don’t know how to approach a Chinese person, then try out with asking for direction or to borrow a tissue, fire or whatever else you can come up with. When they smile back at you, you can start the conversation and don’t worry if your Chinese is not fluent yet. The Chinese are very patient and they tend to always be really surprised that foreigners can even speak a few single sentences so try your best and I bet they’ll help you if you get stuck in the middle of a sentence. After sharing Wechat contact information, you are ready to invite your new friends out for dinner or karaoke which are some of the most popular activities when it comes to socializing in China.

There are many great language apps out there and you don’t have to think a minute yourself. The phone can do all the work for you and will tell you exactly what all of the Chinese characters around you mean. But how much fun is that? You’re here to learn Chinese, remember? This is why a great idea is to quickly go to your phone’s app store, search for Pleco and download it as fast as possible. Why am I suddenly in such a hurry? Well, this is just because the faster you get that app on your phone, the faster you can get started on learning even more Chinese.

With Pleco, you can go around and when you bump into a character, you don’t recognize, you can take a look at it and then write it down on your phone’s screen. Pleco will help you recognize the character and tell you what it means so instead of using an app which translates the whole thing, you are now on your own. You have to write down every character and the writing will go through your hands which will help you remember how it is written for later on. If you like the character, then make sure to save it in Pleco’s archives. You can create different lists for different vocabulary and you are able to go back to the characters whenever you want to practice them again.

Why not take advantage of the curious Chinese around you?

Another funny thing about Chinese society is that the Chinese don’t really seem to understand the word privacy. Some people don’t like this but I think it is great (not all the time of course) because next time you need help to make your homework, you can go out in the public, sit down somewhere and practice your words. I can promise you that one or two curious aunties are going to take a look over your shoulder to see what Laowai (foreigner) is up to. if you ask, I’m also sure that they would love to help and won’t leave before you’ve finished.

It’s the same in the metro. When I studied Chinese fulltime, I always did homework on the long ride in the underground. The Chinese sitting besides me on those trips loved to intervene and tell me how I could also write down my sentences to make them sound even more Chinese. These days many people play on their phones while they’re on the train but I do believe that you’ll bump into somebody who’s too curious to keep watching the soap drama on their phone and starts talking to you about your homework instead.

If this doesn’t happen or if you aren’t ready to have conversations on the tube, you can always download apps such as Aiqiyi （爱奇艺）or Youku （优酷）where you can find Chinese TV shows and dramas, download them and then watch them offline when you’re sitting on the train or walking to or from school. By doing this, you’ll practice your listening skills all the time.

Make it into a habit to watch

It’s great if you develop a healthy addiction out of watching the Chinese dramas. Watching these for an hour or two a day will make you able to practice your listening skills after school as well. If you’re at home, you can pause the drama when you bump into a character you don’t know and then ask Pleco for help. It’s a great way to learn more oral Chinese and is also more fun than a book. The Chinese dramas usually have a very simple storyline and it’s easy to follow. I would recommend you to take a look at Odes of Joy also called Huanlesong（欢乐颂）which has been described as the Chinese mild version of Sex and The City.

Lena is from Denmark and has been in China for three years. She is working fulltime at LTL Mandarin School while she is filming videos for her YouTube channel Lenaaround.