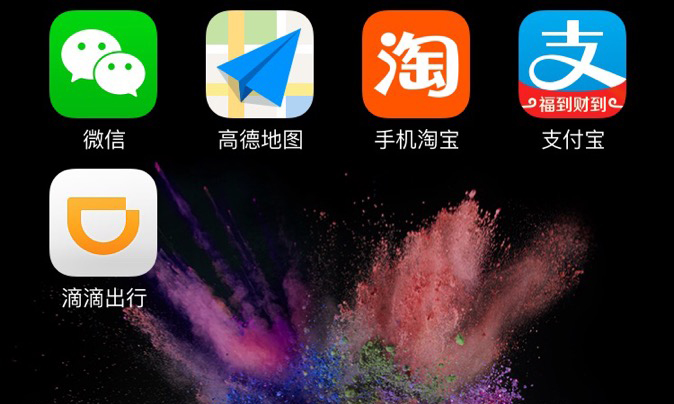 In the first part of this two part blog post, we take a look at five popular apps which the Chinese use daily, and that can make your life in China much more convenient.

Not only that, but if you put these popular Chinese apps on your phone, your home screen might just make you look like a local.

is one of the biggest chat apps in China, currently boasting over a billion users. It is used similar to how WhatsApp, Viber, LINE, etc. are used in other countries but with mainly Chinese users, so you can make a lot of Chinese friends if you have WeChat.
With WeChat, not only can you send messages to friends, but you can also do other things like buying train tickets, movie tickets and transferring money to friends.

You can have a look at our previous post “How to chat with Chinese using WeChat” to learn more about WeChat.

There is also QQ and (Weibo) which are similar to WeChat. WeChat is used more by adults, QQ by teenagers, and Weibo is similar to Twitter.

is perhaps the most popular map app in China, with over 600 million users. Gaode Maps has a strong focus on China, so even though it might not be very accurate in other countries, it is very useful in China.

A popular feature in Gaode Maps is the ability to change navigation voice. There are voices recorded by Chinese stars such as 林志玲, TFboys available, and you can listen to their voices when you are driving, just as if they were beside you in the car. You can even record your own voice, and be your own navigator!

is the biggest online shopping site in China. It is operated by the Alibaba Group in China, and is a marketplace where sellers can open up virtual shops to sell their goods directly to customers. It is often said that: On Taobao, the only limit is your imagination, there’s no limit to what you can buy. To help you put things in perspective: Amazon has just over 600 million products, and Taobao has over a billion! The average active user on Taobao uses it about 7.2 times per day.

Once you get your account set up and begin ordering things on Taobao, get ready for your world to open up. It reminds me of little mermaid – you want thingamabobs, I’ve got twenty.

You can find more information about Taobao in our previous post “Buying things on Taobao”.

is the biggest online payment service in China. Like Taobao, it is also operated by the Alibaba Group. You can transfer money to your friends, charge your phone, pay utility expenses, buy airplane or train tickets, etc. A lot of shops and supermarkets in China also let you pay using Alipay, and sometimes even give a little discount when you use Alipay. So nowadays a lot of young people in China pay using Alipay, since they don’t want to have to deal with cash.

is an application where taxis, premium cars and designated drivers can be hired via your smartphone. It is similar to (Uber). You can book a taxi and easily pay online directly using the app.

Uber is also available in China, and Didi Chuxing and Uber are competing fiercely with each other. Some say that Uber’s cars are more comfortable, but others say that with Didi Chuxing you can pay through WeChat and do not need to download another app, making it more convenient.

Update: Uber is no longer in China. If you want to catch a ride, we recommend downloading Didi Chuxing.

That’s it for this week! In part 2 we will introduce 5 more apps: a camera app, a video app, a music app, a food app and a pinyin input app. See you then!