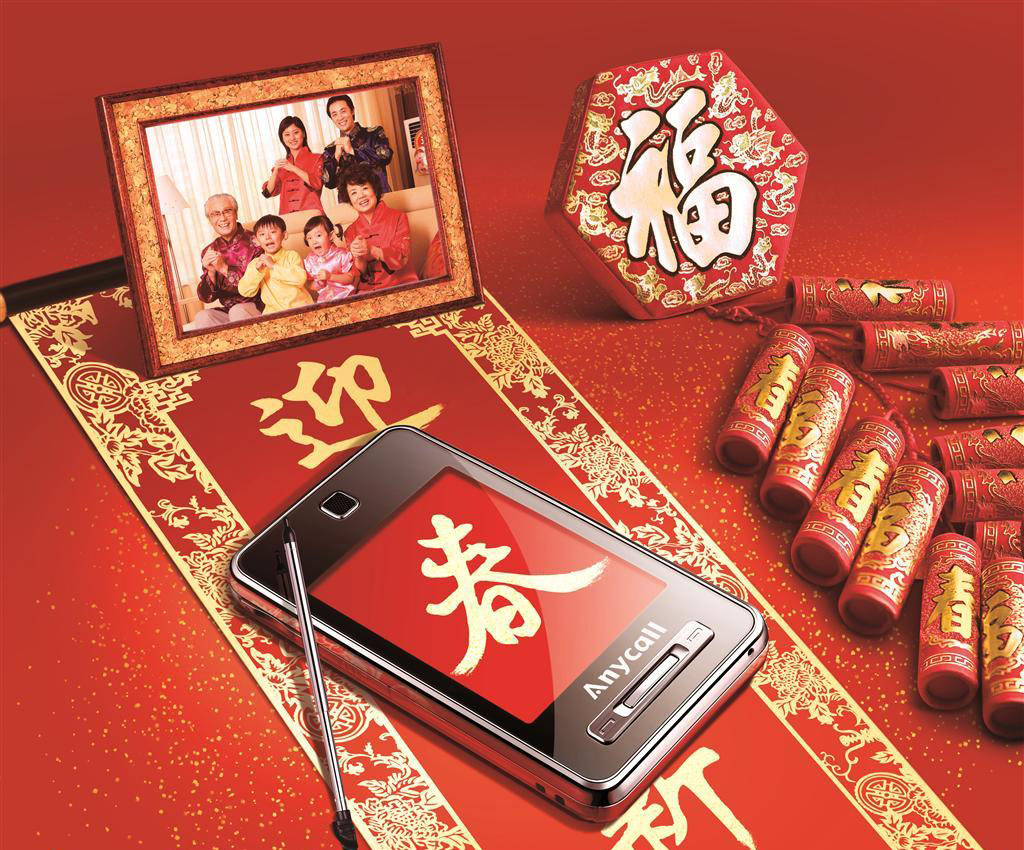 The Chinese New Year is especially important because the Chinese believe that a good start affects the entire year. There are therefore some things you should do during New Year's to bring good fortune, and some taboos that you must avoid. The do's and don'ts may differ a bit depending on where in China you are located, so ask your friends to make sure. Let's have a look at some of them. 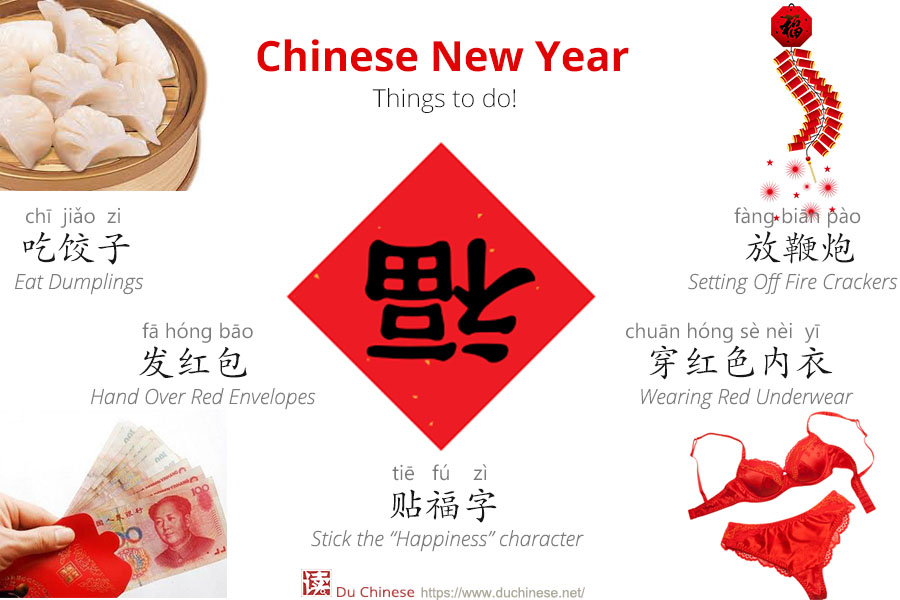 “福” means good fortune, or happiness. The Chinese like to stick the “福” character written on red paper on their door or wall, and doing this means that you will have good fortune in the coming year. But pay attention when you put up the “福” character, because you should put the “福” upside down.
Why? The word for upside down in Chinese is “倒 [dào]”, and if you take the characters “福[fú]” and “倒[dào]” and read them together, you get “福倒 [fú dào]”. The character “倒 [dào]（reverse）” is pronounced just like the character for arrival, “到[dào]”. So “happiness reversed” sound just like “happiness arrives”, and thus putting the “happiness” character upside down means that happiness will arrive.

The day before New Year’s is called 除夕 [chú xī]. On this Lunar New Year’s Eve, it is tradition for the entire family to make dumplings together. Because a dumpling is shaped like the coins of ancient China, eating dumplings symbolizes that you will earn a lot of money that year.
Some families also put a real coin inside one of the dumplings, and the person who gets the dumpling with the coin inside will have the most luck that year.

And old lies behind the Chinese tradition of setting off firecrackers when the clock strikes New Year. The tale goes that a long time ago, a monster called “Nian” went out to destroy crops on New Year’s Eve. In order to threaten and put an end to this monster, people would set off fire crackers, and the loud noise from the fire crackers scared away the monster.

Red is believed to ward off bad luck and misfortune, and the Chinese therefore like to wear red clothes during New Year's. If it is also your Zodiac Year, you must wear red underwear on the first day of the year. So for people out there born in the Year of the Monkey, red underwear is a must for 2016!

红包 [hóng bāo] refers to an envelope made of red paper containing money. At New Year's, members of the older generation often give 红包 to their children, to protect the person of the younger generation from sickness or death. Nowadays giving 红包 to friends has also gotten popular, and with the rise of the internet, this traditional has also reached online. You can now give 电子红包[diàn zǐ hóng bāo], or Electronic Red envelopes, to your friends and family using Alipay and Wechat Payment. This has quickly become popular among young consumers.
You can read more about these Electronic Red Envelopes using the Du Chinese app.

Next, let’s learn about some of the taboos that you should avoid during the New Year festivities. 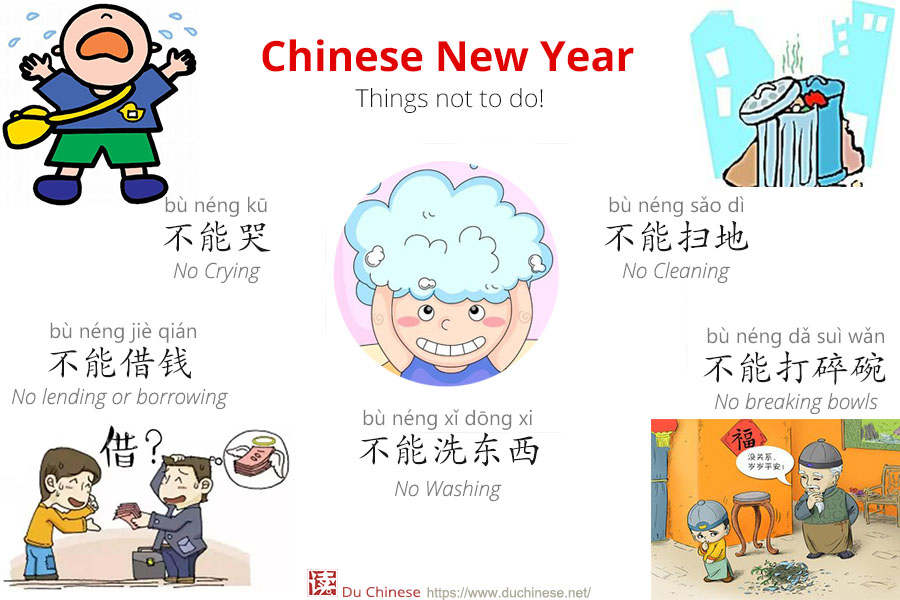 On the first and second day of the new year, you should not clean your house or take out the garbage, as it means cleaning away fortune and good luck. Chinese people clean their house before New Year, and take out the garbage just before the clock strikes midnight.

Just as with the cleaning, washing means washing away good luck, and the Chinese will not wash on the first day of the new year. No doing dishes, washing your hair, or washing your clothes.

Crying will bring bad luck, so you can’t cry during the New Year's period, which is the first fifteen days of the new year. It is difficult to stop children from crying however, so some families stick a red paper saying 童言无忌 [tóng yán wú jì]（Take no offense from children's talk）on the wall to avoid this problem.

Breaking a bowl means breaking good luck, so you have to be very careful, especially on the first day of the year. If you accidentally break a bowl, you can immediately say 碎碎平安 [suì suì píng ān] （breaking, safe and sound） to avoid bad luck, because 碎碎 [suì suì] has the same pronunciation as 岁岁[suì suì]，and 岁岁平安 [suì suì píng ān] means peace all year round.

No lending or borrowing 不能借钱

If you ask a Chinese people to lend you some money during New Year's, I doubt they will, because doing so means they will lose money the entire coming year.

At last, let’s learn how to say ”Happy New year” in Chinese to end today’s lesson.

“猴年吉祥” can be used this year because it is the year of Monkey. You can use “zodiac animal of the year +年+吉祥” for other years. For example, next year is the year of rooster, so next year you can say ”鸡年吉祥！[jī nián jí xiáng]”. You can read more about the Chinese animal zodiac in a previous blog post.